Is your crane safety up to snuff? Electrical fire leaves man severely burned.

Crane safety is critical – all operators know this. But what kind of dangers might you be missing? 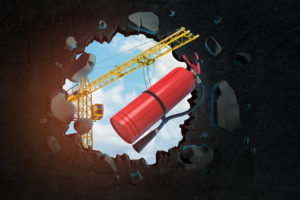 An electrical fire in an operator’s cabin at the top of a construction crane in Coquitlam sent a worker to hospital Wednesday.

RCMP say they were called to Westview Street and Dansey Avenue around 4:30 p.m.

Fire crews managed to extinguish the blaze in the cabin, which was roughly 150 feet in the air, after using a large aerial ladder.

We all want to feel safe on the job. Whether you’re responsible for operating the crane, rigging, or overseeing the worksite, crane safety is (or should be) everyone’s top priority. This is why it’s important to maintain your certifications and make sure your equipment has been properly inspected. Everything should be up to OSHA standards. According to OSHA & BLS, “5,147 workers died on the job in 2017 (3.5 per 100,000 full-time equivalent workers) — on average, more than 99 a week or more than 14 deaths every day.” These numbers are unacceptable.

Having your crane safety evaluated by experienced professionals is critical.

Colorado Crane Operator School doesn’t just provide training for certification – our instructors and inspectors have years of hands-on industry experience. They know the dangers of operating a crane and your safety is as important to them as their own.