Going Virtual – Is there a new future for practical testing?

“There are as many applications for VR [Virtual Reality] as you can think of, it’s restricted by your imagination.” –John Goddard, HTC Vive

By now we’re all familiar with the idea of Virtual Reality for entertainment – it’s not a new concept. Our culture has been enamored with the idea of popping on a headset and stepping into another world since the ’80s & ’90s with movies like Tron and The Matrix. But the practical applications go so much farther than video games.

A recent article from Forbes highlighted the exciting possibilities for VR, including virtual safety training: 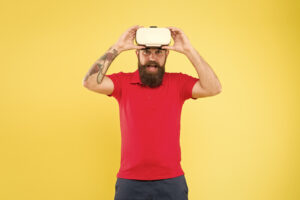 “One of the coolest applications for VR in business is in training. It’s possible to use VR technology to simulate an environment like a construction site. This makes it a very safe and effective way to train people in safety and security protocols. It can also be a lot more convenient and inexpensive. It’s very likely that more companies will adopt VR for training.” Blair Williams

The NCCCO Foundation has just published a study on the application of Virtual Reality for practical crane operator testing – and it looks promising.

“The study, which was conducted over an eight-month period, tracked the performance of a group of NCCCO certification candidates taking crane operator certification exams on actual cranes as well as via VR-simulation.  The results indicate that the VR test is a highly reliable measure for predicting a passing score on an actual crane.

However, Judd, an internationally recognized expert in the development of performance-based exams for high-stakes certification testing, and who has served as an ANSI assessor for its personnel certification accreditation program, cautioned that, while the results were encouraging, further studies would likely be needed.”

While virtual testing can never replace the hands-on training and instruction you get from experienced trainers, it certainly seems that VR will have a place in expanding our training and testing capabilities in the near future.