Video footage showed a crowd of people rushing to help her as she lay injured on the pavement in Burdett Road. Witnesses said the woman was given CPR by passers-by until the emergency services arrived and she was taken to hospital. A man was also treated for shock at the scene, Scotland Yard said. Police and paramedics raced to the scene near to the junction with St Paul’s Way at about 9.40am. Rohan Khan described the aftermath of the incident after walking by the scene at 10am. “There was masonry and timber debris scattered all over the pedestrian footpath and road,” he told the Standard. A Scotland Yard spokesman said: “Police in Tower Hamlets are dealing after a woman was injured by falling debris. “Officers were called at 9.40am on Tuesday, March 27 to Burdett Road at the junction with St Pauls Way, E3. “A woman has apparently been struck by debris falling from a building site crane. London Ambulance Service attended and the woman was taken to an east London hospital in a critical condition. “Her next of kin have been informed. Local road closures are in place while emergency services deal.”

A spokeswoman for the Health and Safety Executive confirmed it is investigating. She said: “HSE is aware of an incident which took place in Mile End earlier today and resulted in a woman being injured by falling debris. “Inspectors have attended the site and are making ongoing enquiries in conjunction with the Metropolitan Police to investigate the circumstances of the incident. As the investigation is ongoing we are unable to comment further at this time.” Steve Boreham, construction director of Higgins Homes said in a statement: “Our primary thoughts and concerns are with the lady who has been injured and those affected today. “We are working with the Health & Safety Executive who are investigating the incident to determine the cause and will release more information as soon as it’s available. Our priority at the moment is of course to make the area safe.”

Check out the aftermath video here: 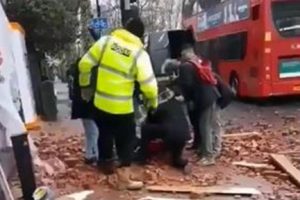