Working Under a Suspended Load

Let’s start by asking, what is a suspended load?

Essentially, a suspended load is anything that is lifted off the ground.  It doesn’t matter size or weight. Loads can be suspended by loaders, forklifts, or the obvious cranes. When working on-site our heads have to be on a swivel and paying attention to our surroundings. Usually, there is more than one lift going on at the job site at one time.

If you are the one rigging the load there are a couple of things you should know. Make sure the equipment you’re using can support the load you’re lifting. Make sure you and the person lifting the load make contact and are in communication the entire time. Never stand directly under the load. Also, ask yourself – where is the load going? Make sure you’re in a good position so the load won’t swing over you once it’s lifted in the air. If you’re holding the tag line, be sure that you have a clear path to land the load without having to get under it.

Suspended loads come in many shapes and sizes.

With that being said it’s important to know the “fall zone” or the area in which the suspended load could fall. Use a 360-degree radius for the event a beam or a panel falls, you don’t know which way that panel or beam could fall. Even if you’re not involved in the pick ask yourself “Am I in a safe place if that load were to fall?” 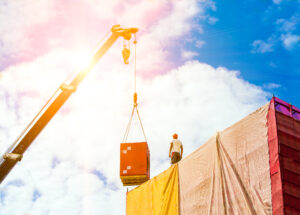 Here are some guidelines from OSHA on the matter of suspended loads:

Avoid carrying loads over people. Plan the load travel path to minimize exposure to individuals on the site.

When a suspended load is not moving it is only permissible to have an employee in the fall zone if they are – hooking, unhooking or guiding the load, doing the initial attaching of the load to a component or structure or operating a concrete bucket.

Hooks with self-closing latches or their equivalent must be used (“J” hooks are permitted to be used for setting trusses.)

The load must be rigged by a qualified rigger.

When a load is being landed, only employees needed to receive a load are permitted to be within the fall zone.

Create barriers or tape off high rise areas. Make sure trades and those working in the area are aware of what’s going on and to stay clear of the suspended loads or travel path. Use tag lines so you can guide and distance yourself from the load. And don’t stand under the load!!!

For more check out our blog on Wire Rope Safety